It’s been a long time, we shouldn’t have left you….without some dope spots to travel to!

Traveling is one of the few things that takes you far away from everything yet brings you closer to the core of your being. I make it my business to get away as regularly as possible. Whenever I start feeling agitated at work or bored with mundane routines, I know that I’m long overdue for a getaway. Clearly, all my favorite airlines are in tune with my chakras or something, because I usually can catch a great travel deal. Good looking out on the fare sales, Southwest!

This summer, I ventured to Thailand with one of my best friends. We planned the trip so that we would go during a lull in our work schedules and got lucky that it also fell on his birthday. My best friend is a HUGE lover of just about everything Asian, so it really couldn’t have been more perfect. We traveled to Bangkok for the first three days and Phuket for the next three days. For anyone considering an international destination, I would absolutely recommend it. The people were amazing, the food was phenomenal, and everything was unbelievably affordable. Overall, it was a great experience.

As an American Black woman, I recognize that there is a very specific lens through which I see destinations, both domestically and internationally. While I love exploring new cultures and experiencing new ways of life, I also have to factor some things a bit more heavily into my travel choices like my safety, well-being, and possibilities of discrimination. Thankfully, Thailand did not give me any huge negative impressions, but I did notice some things that only a Black woman would naturally pick up on.  Here are a few of my takeaways and some things to be mindful of if you decide to venture there:

Whiteness (and the aspiration of whiteness) is global. As soon as we stepped off the plane, it was immediately apparent that whiteness was the ideal beauty standard in Thailand. Sound familiar? There were massive billboards for bleaching cream, tv ads that showed extremely fair-skinned Thai individuals living in the lap of luxury, and tons of spas touting long-lasting bleaching treatments. I’ve read and heard from friends that this is a common part of Asian culture, but it was definitely a bit unsettling to see in such an overt way. I can’t say that I felt offended, but it was definitely the beginning of my feelings of hypervisibility. Which leads me to my next point…

Black skin is a spectacle. You ever want to feel like a celebrity? Travel to Thailand while Black. Street vendors will go from trying to bargain with you one moment to shamelessly staring at and commenting on your skin the next. It was constant. People wanted to take pictures with us, and some folks in Phuket kept yelling “Obama!” whenever my best friend walked by. Again, it never offended me. In fact, it made me more proud that my skin was unique in a sea of whiteness. It was to be admired and revered. A welcome change from how America seems to feel about Black skin. 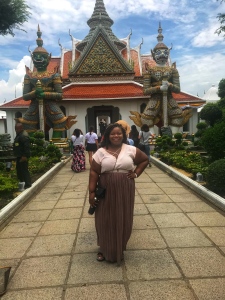 Hair weaves, braids or any of “our” hairstyles is also a spectacle. Black women know that we love a bomb protective style while traveling! It’s easy, cute, and one less thing to worry about while we stunt for the ‘gram and live our best lives. I had crotchet faux locs during my visit, and I can’t tell you how much people seemed to be fascinated by my hair. THANK GOD no one tried to reach out and touch it, but I can definitely see in their eyes that they were fighting the urge. This is not to say that you shouldn’t wear protective styles in Thailand by any means; just know that it adds to the “stare” factor.

Curvy women are few and far between. In all of my time in Thailand, I saw ONE woman who looked like she might have possibly been a US size 12. If anything made me a little uncomfortable, it was likely that. Mostly because in close quarters, I could see that I take up more space than what they were used to. In addition, it further reinforced that America is intentionally killing all of its citizens with unhealthy foods for their own financial gain (but that’s a whole other post for later). Obesity is normalized in America, and it did make me more aware that taking better care of myself physically will be my form of resistance. That was an interesting dynamic to experience but it definitely didn’t make me bashful to show these Southern-fed and bred curves all over the Phuket beaches. You gon’ get these lady lumps, Thailand!

Thailand residents will assume you are rich because you are American. Again, who doesn’t like to feel like a celebrity? Because we are Black and American, Thai people assumed we were ballin’. I mean, we kinda played into it because we were ordering like two entrees at every restaurant. Judge us, we didn’t care. The food was so fire! But beware, this will make you a prime target for scammers! 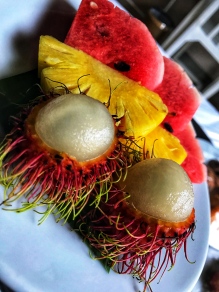 Gratitude will be your biggest takeaway. The people in Thailand were easily some of the nicest people I’ve ever met in my life. It’s clear that respect and courtesy are integral components of Thai culture. In our interactions, the people who seemed to have to least amount of material things had the warmest, most genuine spirits of all. Also, as you move around Thailand, you see poverty juxtaposed in the city’s landscape in plain sight. It’s not hidden, it just…is. So it was also a humbling reminder that we were so fortunate and blessed to not only be able to travel to another country but to return home to careers, families, and more blessings than I had realized before. 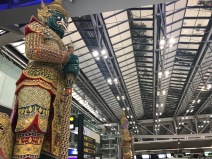 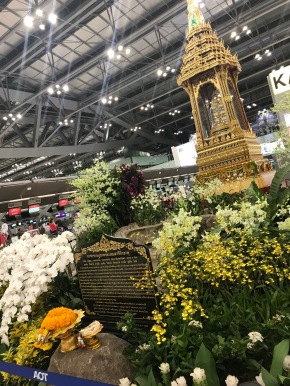 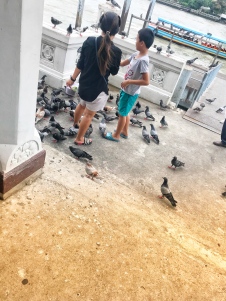 This is definitely not an exhaustive list of my Thailand revelations, but hopefully enough to show you how to deepen your experience if you decide to visit. A few resources for the traveling Black Woman:

Let us know more about your favorite travel destinations in the comments and on our social media at @pedestalproject!